Our first Museum Madness of 2012 was a huge success.  Tour Guides Leah and Lily organized and implemented the program yesterday doing a fantastic job.  The kids were able to have a tour of the Museum, learn a bit about the history of the dream catcher and then they were able to make their own dream catchers to take home.  They also enjoyed a scavenger hunt, coloring,  a great game of hangman and a very healthy snack of oreo cookies.  We are looking forward to the next Museum Madness of August 8 were there will be different activities.  Don’t forget to pre- register. 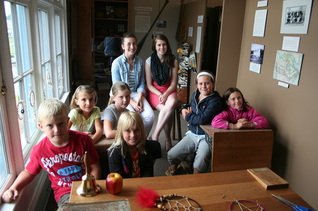 Pictured with our two tour guides are our kids for the day Nolan, Rachel, Chelsey, Halle, Christina, and Lea.

This Week At The Museum

We’ve had a rather Large week here at the Museum.  On Monday we were able to set up a wonderful exhibit of photos from Montague and area at the Down East Mall.  Hope you enjoy them.

Our final Museum Madness was on Wednesday where we had six children playing loads of games,got to make butter and best of all they got to eat the butter on biscuits.  We had a very successful year for our Museum Madness children’s program and look forward to next year.

It was our pleasure to play a part in Greta Hall being honoured by the Town of Montague this week.  Greta was originally from Montague and spent many years involved in the world of Speed skating.  Going on to become the first female judge of speed skating in multiple Olympic games.  After a fantastic career she has decided to donate her treasured memorabilia to our Museum.  Look for some of her donations on exhibit next year on the second floor.

Along with everyday duties, guided tours and genealogy searches this week has flown by.  Hope everyone has a relaxing weekend.

We were very pleased to have been part of the “A Night with the Artisans” event on August 23.  It was a wonderful night filled with art, music, wine and amazing people.  Pictured is Assistant Curator, Connie Spencer, talking about the history of the buildings located on Main Street Montague.  Including where the first Art Gallery was located.

The director of the Community Museum Association, Barry King visited us this week with his two workers Alex and Maureen.  They were photographing items in our Museum for their website link to QR Codes.  A project they’re working on.  After having lunch we took them on a tour of our Artifactory.  Always fun to visit with them. 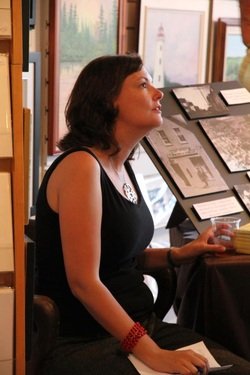 We were very sad to have to say good bye to our summer tour guides this week.  What a great time we had with them and very much hope to see them return next year.  Hope the girls have a great school year.

In other news we announced an upcoming event being held at the Museum on Sept 29 12- 5.  It is a Historical Culture Photo Exhibition we’re calling “Impressions”.  For this one day we are having admission by donation instead of our regular charge.  History and Culture go hand and hand.